As you work to improve your current products and fill your pipeline with innovations, the first thing you’ll want to know is what’s most important to consumers when they’re considering a product like yours?  Teasing out the “must have’s” from the “nice to have’s” can mean the difference between success and failure.

Key driver analysis has been the traditional “go-to” answer to that call, utilizing regression models to deliver a straight-forward hierarchy of what elements are driving product appeal. While a time-honored approach, it is not without its flaws. The good news?  There is a better way.

Bayesian networks provide a far more sophisticated, yet still simple-to-explain, solution to uncovering key drivers. The probabilities-based alternative pairs advanced analytic power with an informative, easy-to-digest visual. The networks mitigate many of the shortcomings associated with regression analysis without losing what makes key driver analysis popular in the first place. 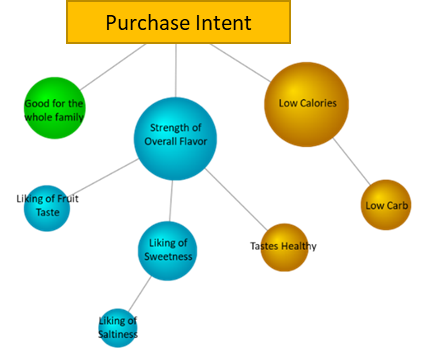 The most frequent problem with using a standard regression-based approach to key drivers is the potential for over-simplification of the way product elements relate to each other and to the “target” measure (such as Purchase Intent or Overall Liking). A basic, but necessary, assumption to the regression model is that the measures included as potential drivers are not related to one another. This independence is almost never the case and in many instances, the relationships between attributes are immediately evident and intuitive.  For example, consider the researcher asking both “Liking of sugar coating” and “Liking of sweetness” in the context of a product test: both attributes are important to understand, but clearly, they are not independent.

The resulting issue is a high level of “multi-collinearity,” in which the explanatory power of these two attributes overlaps, but where all of that power is attributed to only one of the two elements. Finding that “Liking of sugar coating” is a key driver, but that “Liking of sweetness” is not statistically related to Overall Liking at all yields an awkward interpretation of key driver regression results, and may throw the entire analysis into question.

Solution: Bayesian networks. By creating a structure that considers all attributes of a product in an inter-related network, strong correlations between items become a strength, rather than a weakness of the model. The network structure also visually lays out the interrelationships between metrics. This allows researchers to follow along the entire path (or multiple separate approaches) of all elements to the “target” (e.g., Overall Liking). No longer are the key drivers decided behind a proverbial “black box” linear regression, but instead the full story can be followed like a map. It allows for not just a single, most influential path to product appeal, but for a comprehensive product view from which to build thoughtful business strategy.

In short, Bayesian driver networks are both statistically more robust than traditional regression, and produce a clear and simple output. An elusive “win-win” for researchers and a clearer path to success for your products or services.

The Insights Association protects and creates demand for the evolving Insights and Analytics industry by promoting the indisputable role of insights in driving business impact. All revenue is invested in quality standards, legal and business advocacy, education, certification and direct support to enable our members to thrive.

The 2019 IA Code of Standards and Ethics for Marketing Research and Data Analytics may be found here.

Our members are the world's leading producers of intelligence, analytics and insights defining the needs, attitudes and behaviors of consumers, organizations and their employees, students and citizens. With that essential understanding, leaders can make intelligent decisions and deploy strategies and tactics to build trust, inspire innovation, realize the full potential of individuals and teams, and successfully create and promote products, services and ideas.

Learn How We Do It